‘Sherlock and Watson work on deciphering deadly symbols that are covering the walls around London, killing everyone who sees them within hours, before any further victim succumbs to the mysterious Black Lotus.‘ 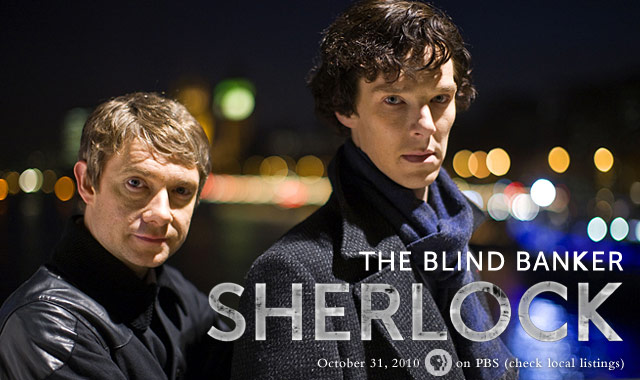 After the fantastic pilot episode, The Blind Banker had a lot to live up to. While it wasn’t quite as good as the first one this second installment is definitely great television. Benedict Cumberbatch and Martin Freeman have the sort of chemistry on-screen that usually only comes after years of working together.

Once again, the relationship between Holmes and Watson takes centre stage. Their dealings with each other are still a little frosty e.g. Holmes introduces Watson as his friend, Watson then corrects him and says that he’s a colleague – but they are there for each other when it counts. While they do get frustrated at each other’s little quirks, they have both recognised that they work best as a team.

One interesting thing to be thrown into the mix in this episode was a love interest for Watson. Watson really took centre stage in this episode, and I had to feel bad for him when his love life inevitably collided with his life with Holmes. The awkward interactions between Holmes, Sarah (Zoë Telford) and Watson were fantastic, and leant a real heart to the episode.

Unfortunately, while Watson was very strong in this episode, something seemed to go wrong with Holmes. While the other characters are supposed to look at Holmes as if he’s strange, the audience is meant to be on-side with him. But in a number of scenes he seemed to be oddball rather than just eccentric. Also, there were a couple of inexplicable action scenes thrown in with Holmes that just seemed to be put there to spice up the character. I don’t have a problem with Holmes getting in on the action, but there should be a reason for it.

The actual mystery itself was much more convoluted than the pilot, which was to be expected now that the character introductions are out-of-the-way. I really enjoyed trying to guess which book Holmes was looking for, and his interactions with the new Police Detective were interesting (although their conversation at the end seemed a bit out of character). Moriarty is once again referred to but not seen, he’s the master manipulator. I’m glad that the writers didn’t decide to throw Holmes’ famous adversary in right from the start, we would have missed out on the great sense of menace that is being established with the little references that have been popping up.

Overall, while it wasn’t as good as the first episode, it’s definitely worth watching. Hopefully the series will be able to maintain this level of quality.

What I Liked – The relationship between Watson, Sarah, and Holmes worked really well. The mystery was great, with a very satisfying conclusion. The Moriarty angle isn’t being overdone.

What I Didn’t Like – Sherlock seemed a little off kilter this episode. I thought some of the scenes with Sherlock fighting various people were silly. The detective’s attitude at the end seemed out of character.