‘In the mid-27th century, the Terran Confederation is at war with the felinoid Kilrathi Empire. After destroying a Terran base, the Kilrathi have seized a NAVCOM unit with the hyperspace jump coordinates to Earth. With Terran reinforcements scheduled to arrive two hours after the Kilrathi hit Earth, it falls upon the starfighter carrier TCS Tiger Claw to keep the Kilrathi busy.‘ 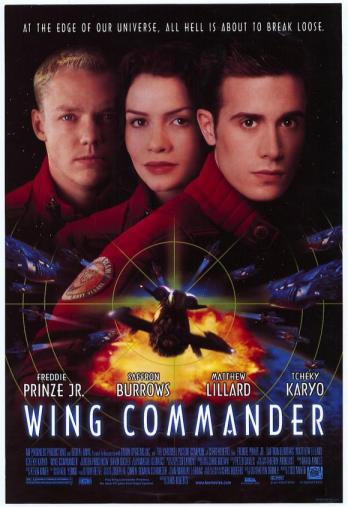 When a sci-fi movie made in 1999 clearly intended for a broad youth market (given the casting of the two guys who would go into the dizzying heights of…the Scooby Doo movies) is measured against a PC game made in 1994 and comes off as wanting in the story, characters, costumes and visual effects department it’s time for Hollywood to think hard about their standards. Oh, wait… 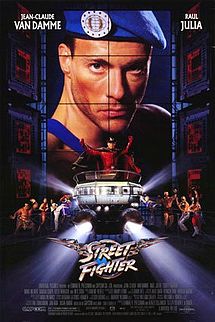 Oh get fu… actually, this could be really awesome in Spanish.

I remember being about 15 and reading that Luke Damn Skywalker was going to star in something with a porn star; it made my adolescent day! Then they go and put in Sallah from Indiana Jones, Biff from Back to the Future, and mother-lovin’ Malcolm McDowell as well! What’s that? It’s a computer game? For real? I mean, an awesome computer game, sure. But why aren’t they making this into a movie!? I mean, what have these actors got on their schedule that they can’t move around to fit this in? Seriously? I mean, McDowell was in Tank Girl for crying out loud! These people will do anything if you pay them! They might even do it if you don’t!

He was in a Stanley Kubrik film… and this.

Soooo, what’s crazy about this studio film version of a totally awesome space combat simulator franchise is that it was written and directed by the guy who was responsible for the games in the first place. Chris Roberts wrote and directed the Wing Commander games through the 90’s, and they were excellent. Among the first games to combine the gameplay with cinematic cut scenes featuring real actors and sets, the Wing Commander series kicked all kinds of ass.

I found nothing noteworthy about this movie. It’s not “so bad it’s good”; it just seems so manufactured that it’s soulless. Dialogue is purely functional, effects are uninteresting, plot is forgettable and the characters are one-dimensional. Now, this is all stuff that largely rests on the writer’s shoulders, given that the actors and team making the movie can only really do what’s on the page to do. Thus we, the audience, are relegated to watching Fred and Shaggy hit on women with model-like features between supposed life-or-death battles with enemies who look less convincing than

I’m willing to admit that my affection for the games probably spoils my ability to objectively enjoy the flick, but I don’t even think this would reach any audience other than those guys who go to video stores and systematically work their way through the entire sci-fi section.

Not that I’d know anything about that…

Uhh…maybe, run the dialogue from Scooby Doo over the footage? Play the “Hey! It’s that guy!” drinking game? Y’know what? There’s a guy who’s edited all of the scenes from the games together to make a movie of Wing Commander III: Heart of the Tiger, and Wing Commander IV: The Price of Freedom. Watch those instead.