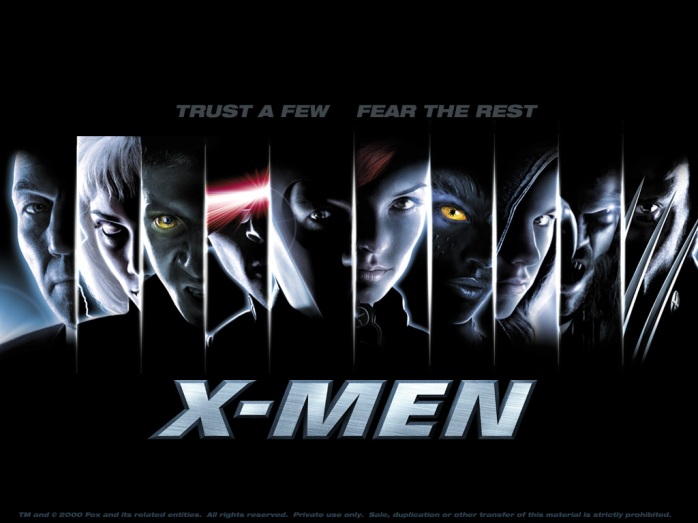 Believe it or not, there was a time when this didn’t seem like such a great idea.

The build-up had been enormous (almost Phantom Menace in hype), and fanboy/girl nerves were heightened. With good reason too: not quite three years prior had seen the release of Batman and Robin – a travesty so abominable that I’m forced to chop my hands off and scrub my eyes and tongue with steel wool just for having typed those words. That had also been the year WB released Steel – and what a brilliant move that was…oh crap, I forget that you can’t read sarcasm – so the comic book movie star wasn’t exactly a golden ticket. True, Blade had been released in ’98 to general enthusiasm; it wasn’t winning any awards, but Señor’s Goyer and Norrington took a punt on a comic-book vampire flick at a time before comic-book or vampires were cool – and damn if people didn’t dig on the daywalker.

Still… X-Men was far from a sure thing.

And then it hit…and it was un-be-LIEV-able. Any imperfections were drowned out in the staggering awesomeness of how good it actually was. Characters you cared about; a story you could follow; and a villain you could empathise with. Blade may have got there first, but X-Men made comic-books viable for the movies. It satisfied the vast majority of fanboy pandering (Patrick Stewart had been touted as the only possible actor that could play Professor X for, like, twenty years), while providing something fresh that everyone could latch onto. And it introduced us all to the unstoppable force that is…HUGH JACKMAN. Did I mention he was in this film? Oh, and True Blood fans can thank Bryan Singer for giving us Anna Paquin – all growed up now I see.

Thanks Bryan Singer. From the bottom of our hearts.

Looking back now, though: not perfect. The film is dialogue heavy, and some characters are loaded with the unfortunate task of having to explain everything to everyone (I’m looking at you Professor X-position!); on top of this is my recurrent complaint that the one character who is supposed to be nigh-on invincible…y’know what, I’ll get to that later on. Even acknowledging what an all-round good film it is, each time I re-watch it, the problems are more evident. My first temptation is to describe the X-franchise as a study in the Law of Diminishing Returns – and there may be some evidence to support that argument. You know, if it weren’t for the frickin’ awesome sequel!

X2 is undoubtedly the superior movie. Without the need to set up back story or introduce characters, we get to dive into the action and intrigue. The opening scene in which we meet Nightcrawler (Alan Cumming) for the first time kicks more ass than anything else in the entirety of the franchise. We witness Wolverine let loose on a bunch of soldiers while we hear everyone in the audience sigh “finally”. Characters are more fully realised all round; dialogue’s better; they deal with the Logan/Jean/Scott “love triangle” in what I’ve always thought was a really satisfying way. The biggest problem arising from this one, I reckon, is the extreme level of disinterest in the character of Cyclops. But y’know what? I’ll get to that in a minute.

Around this time we heard the rumblings: the floodgates had opened. Every last property that Marvel had was snapped up by someone – anyone – desperate to catch that lightning in a bottle. What’s next on the X-horizon? That’s what we all wanted to know (the fans). We were thrilled to be told that not one but three great X-flicks were in the pipeline.

As posterity has communicated to us, however, we did not receive three great films that enhanced and expanded the X-world.

We got X-men: The Last Stand.

This isn’t the place to discuss why the brilliant Singer was replaced by…this guy. I just care about the movie – and the movie was not good.

Defying simplicity, however, I can’t simply say that it sucked and had no redeeming qualities (I’ll leave that to Movie Bob). Y’see, I kinda enjoyed it the first time I went to see it. No doubt this was simply because of the fact that the Ratt threw so much stuff at the audience, we (ok fine, I) was too distracted to notice that someone had let all of the air out of all of the actors. Seriously, actors who had been doing great jobs up till now suddenly had less life in them than the posters that trumpeted their return (exceptions go out to Patrick Stewart and Ian McKellen, who are always great…aaaaand Hugh Jackman I guess. I mean c’mon, you can tell that he’s really, really committed. He wants this to work so badly I- uh, bad choice of words).

I’m tempted to ask, if this had not had the two great first instalments to build up expectations, would we have as much of a problem with it? Worth considering. But the fact is that we did get two great movies, and then everyone dropped the ball.

Which brings me to the guy who gets the award for Team Player…and it’s not Hugh Jackman. It’s James Marsden. Apart from approaching the role from the very beginning with the perfect blend of sincerity and focus, Marsden helped all of these people tell their stories without ever demanding a moment to shine. Marsden made the romance angle between Logan and Jean far more interesting by being the “other man”; He gave everyone their cues to begin explaining the plot to the audience; and he accepted a steadily decreasing role as the films progressed. I mean, they gave Scott the biggest shaft in movie history come Last Stand (and MAJOR props to James Marsden for being a good sport about it all and showing up to do the job…or have the job done to him).
There’s nothing wrong with viewers having a favourite character. And there’s nothing wrong with viewers not having Cyclops as their favourite character. The problem is when producers pick a favourite character, and decide that since he’s everybody’s favourite, they should just make the flicks about him.

This brings me to X-men Origins: Wolverine, and some of the broader problems of this franchise.  Y’see, in the beginning they touted this as an ensemble piece. That’s what X-Men has always been: a team book. But that got gradually pushed aside with each instalment because everyone wanted to focus on the “Bad Guy” – Wolverine.

Sorry guys, I needed the money!

My beef isn’t with Hugh Jackman – he took a role and made it his own; he’s watchable; he’s likeable; and given that this is a universe in which humans can be blue, covered in metal skin and/or able to make you dance naked in the rain with their mind, Jackman’s close to believable. But Logan’s the lone wolf who is embraced by a family – and no one really seems to care about the family. Just give him his own movie where you can really let loose.

So, Wolverine. A movie about the Lone Wolf…that they’ve surrounded with five hundred wacky supporting characters. I know they’re there to establish his past in the Weapon X program with Stryker and everything, but still. This flick, much like Last Stand, becomes a big exercise in missing the point.

Still, I can’t write this movie off completely; it has some genuinely great moments. The opening credits sequence was worth the price of admission alone, and is the best example I have ever seen of establishing the basics of a character using no dialogue. Any moment – and I do mean any moment – featuring Liev Schreiber as Sabretooth…look, he steals the show ok? And considering that Sabretooth was possibly the least interesting character in the first flick, kudos to Schreibs’ for making that work. And although entirely shoehorned in for the sake of laying pipe for potential future flicks, the cameos that were Deadpool and Gambit were a bit of a thrill…all…collective six seconds of screen time.

I think he was in there somewhere…

But (and here’s where I’ve had issues with Wolverine since the first flick) when things focus on Ol’ Logan and his efforts to build a normal life for himself and form some deep and lasting connections with others…zzzzzzz…
…Oh, I’m sorry. I dozed off. Like he does. Continually. Every movie.

Jackman’s Wolverine is just too…nice. When he says “I’m the best there is at what I do…” I don’t buy it. His Wolverine is two steps short of throwing on some tap shoes and getting into musical theatre. X-men is actually the worst offender, since he spends half his screen time waking up in the hospital. Seriously, he’s rendered not just unconscious, but comatose three times. This is the guy with the healing factor! He’s indestructible – THAT’S THE WHOLE PURPOSE OF HIS CHARACTER. Yet he gets a bump on the noggin and he’s carted off to intensive care. Added to all this is the fact that he gets his arse handed to him by everyone he meets.

However, in the midst of the mess of Wolverine were scenes and performances from a good movie, perhaps even a great movie. It’s the movie they forgot they were supposed to be making. And this is something that the “spin off” flick has in common with the most recent instalment: the prequel X-Men: First Class.

To be sure, First Class leans far more towards the “great” movie than its predecessor, but not enough to cover over the flaws on display. When the story focuses on Xavier or Magneto (McAvoy and Fassbender – both bloody brilliant) we’re in a winning 60’s period piece that feels like James Bond with superpowers. Just about everything else is tonally all over the place. There’s no consistency to the time period, until we get to the climax of the film. And hey, I like Kevin Bacon as much as the next guy but…well, actually he was kinda bad ass.

Yeah… You know he tapped that.

Y’know, it’s how things are written that bug me. First Class falls prey to the “need” for the movies to display some measure of consistency, or to use the dreaded word: continuity. It means the development of characters and relationships (namely Charles and Eric) are cut short and sacrificed because it’s of greater importance to reach the character beat where they part ways by point X in the film. Vaughn and crew almost, almost pulled a really impressive U-turn. I guess, for that much, I should be grateful.

X-men’s got legs…and some people know how to use ‘em. Here’s hoping that the inevitable X-men: Storm & Banshee’s Big Date will be helmed by one of them.

How to enjoy them

Invite every comic-book reader you know around, and get them to bring every issue of X-Men they have. Wear red-tinted glasses and loudly quote the terrible lines while the first movie plays. Find something to put in your mouth so everyone can shut up and enjoy the sequel. Then spend Last Stand and Wolverine having your comic-book reading friends (or acquaintances) complaining and telling you loudly each and every departure the flicks make from the funny-book origins (it will be more enjoyable). Kick everybody out except for the ladies, dress in your best tuxedo, have a friend (not one of the comic-book guys) make everybody a steady stream of Martini’s, watch First Class, then plan a classic Bond marathon, starting with Dr. No.

Last Stand Rating – 2 out of 5 (Disappointing)