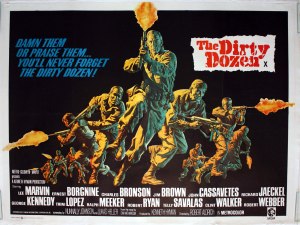 Watching The Dirty Dozen immediately highlights how complicated modern movies have become. If the film were to be remade today (heaven forbid), I can only imagine how many subplots would have been crammed into the story to make it ‘more accessible’ or to give individual actors beefed up parts. Instead, we engage with each of the characters as part of the group rather than individual anti-heroes. We can’t really root for any of these men, but we can root for The Dirty Dozen.

Though the film was criticised heavily for its violence upon release, it seems almost tame by today’s standards. Rather than over the top explosions and gore, the deaths in the film are sudden and undramatic, far more fitting for the film’s nihilistic message. There are no heroes here, these men are soldiers with one mission – to kill as many of the enemy as possible, soldiers and civilians alike. The Dirty Dozen remains a gripping experience to this day; it’s a classic for a reason. Highly recommended.

Escape Plan is one of those movies that seemed like it was fun when you finished watching it, but is almost entirely forgotten by the following day. There’s nothing especially bad about the film, the premise is interesting and the execution is competent – but there is nothing that really stands out as being particularly good either.

The only reason that this is likely to be of any interest to people is that it puts Stallone and Schwarzenegger together on-screen, a relatively rare occurrence. Both actors put in a good performance here, without the painful callbacks featured in stuff like The Expendables – but neither of them is bringing their A-Game either. It’s hard to really pin down what Escape Plan could have done to better live up to the intriguing premise, but at the end of the day this is a pretty forgettable film. If it happens to come on the TV on a lazy Sunday afternoon I wouldn’t avoid it, but I certainly wouldn’t suggest going out of your way to watch it. 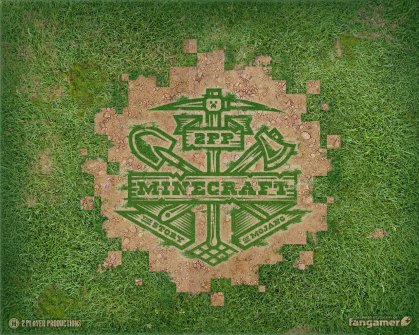 Minecraft: The Story of Mojang is a documentary that contains a lot of fascinating behind the scenes detail; provided you know quite a bit about Minecraft and gaming already. 2 Player Productions have created a film with some great tidbits for fans, but haven’t really done anything to help non-gamers understand what all the fuss is about. A non-fan will probably get the idea that Minecraft was a successful game, but they will constantly be asking questions like: ‘Why is that guy’s face always covered with an animation?’  ‘Who are all these people being interviewed?’ There’s some fantastic material here, but it will be lost on everyone outside of the Minecraft fan base.

There is merit to the idea of making a documentary for a limited audience, but even casual fans of the game will have a hard time diving in. One other annoyance was the number of artistic landscape shots that are littered throughout the film. They’re beautiful, don’t get me wrong – but they serve no actual purpose other than to distract from the main narrative. In a documentary where the narrative is so thin already, this is a major problem. Ultimately, even though there’s some good stuff here, I’d have a hard time recommending it to anyone who wasn’t a hardcore Minecraft fan.

The Wolf of Wall Street is sure to be a divisive film. There will be those who say it’s glorifying terrible people responsible for defrauding thousands of customers, while others will portray it as an indictment of the system that allows such things to happen. I fall into the second category. The film doesn’t glorify these people in the same way that Casino doesn’t glorify organised crime; Scorsese recognises that the audience needs to see exactly how crazy Jordan Belfort’s lifestyle actually was in order to understand him and his motivations.

In a time where we’ve seen how flimsy the worldwide banking system really is, The Wolf of Wall Street is more pertinent than ever. We live in a world where money talks, and where (Spoiler Alert) the bad guys don’t always get what’s coming to them. The brilliance of this film is that it shows us the human behind the stories and all of his flaws, without compromising the important message that Jordan Belfort is a very bad man. The movie is crammed with fantastic performances, making it even more impressive that Leonardo DiCaprio manages to steal the show. This is a must see.

Riddick is a ‘B Movie’ and makes absolutely no apologies for it. This is a good thing. There has been a trend in recent years to try to make action movies far more complicated than they really need to be. Riddick on the other hand is a nice simple tale of one man trying to survive in a hostile world with all the odds against him.

The first 30 minutes or so of the movie are almost entirely without dialogue, evoking memories of Conan the Barbarian. Like Conan, the cinematography and sound are absolutely beautiful, and Vin Diesel is perfect for the role of the modern-day fantasy hero. There are a number of great scenery chewing supporting performances, but this is Diesel’s movie and he doesn’t disappoint.

I actually enjoyed The Chronicles of Riddick, which seems to put me in the minority – but I think with Riddick, Vin Diesel has proven that this franchise has plenty of life left in it. This is a Conan for the modern age, and I hope we see more of him.

This is the End is a moderately funny movie that thinks it’s a lot more clever than it actually is. It’s a movie for Hollywood, by Hollywood. Film stars are popping in left and right to make fun of their public personas, some more successfully than others. The cameos littered throughout the early portion of the film provide a few laughs here and there, but it begins to establish the film’s major flaw of feeling self-indulgent.

As anyone who has seen the trailer knows, the main conceit of the film is a bunch of movie stars left behind on earth during the biblical apocalypse. The plot doesn’t really get more complicated than that. This is primarily a film with six actors saying: ‘Look at me! Isn’t it cool how I can poke fun at myself and my movie roles?’

There are some genuinely funny moments throughout the film, but they only really serve to highlight how dull and predictable the rest of the film is. I wanted to like the movie, and kept hoping it would get better, but it never managed to rise above ‘meh’.

It’s hard to imagine a time when Einstein wasn’t the most famous scientist in modern history, but Einstein and Eddington takes us back to a time when Newton was the be-all and end-all when it came to our understanding of the universe.

The main problem with this film is that it can’t really decide what it’s about. Albert Einstein rails against the German scientists creating horrible weapons of war, Eddington struggles with his homosexuality as well as fighting against the pro-Newton establishment. Einstein’s marriage is breaking up and he starts breaking another woman’s heart as soon as he arrives in Berlin, and – somewhere along the way – Eddington manages to prove Einstein’s theories and change the world overnight.

This is an incredibly fascinating period of history, and it is a disservice to try and tell all the small details in a 90 minute movie. While both Andy Serkis and David Tennant put in great performances, this really feels like someone cut the best bits out of a miniseries and stuck them all together in a film, leaving it to feel like a series of vignettes rather than a coherent movie. I hope someone can take this subject matter and give it the breathing room it deserves in future.