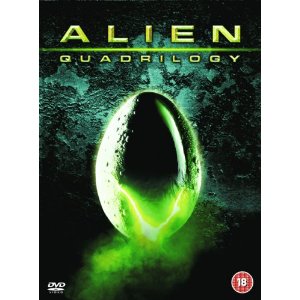 Starring: Sigourney Weaver and a bunch of people that no-one really cares about except for Lance Henrickson and Ron Perlman…but they were all big stars at some point.

There can be no better examination of filmmaking as a collaborative craft than a look at the Alien franchise. This is what happens when a ridiculous number of people get together to tinker with a simple idea – resulting in varying amounts of genius, ineptitude and (in both cases) insanity.

Let’s begin, shall we?

In the 70’s Dan O’Bannon – at one time a writer for EC comics horror titles and collaborator with John Carpenter on his debut Dark Star – shopped around a tight little sci-fi horror piece called Star Beast. Let’s not kid ourselves – this was going to be B-grade, low-budget, gag-filled cinema; perhaps well-remembered by the college students who would go to see it at the drive in with the latest installment of “Halloween the 13th in Texas… with Chainsaws”, but ultimately not a significant mark in the history of this medium called cinema.

Then Ridley Scott got involved.

What Alien basically boils down to is one man deciding that he’s going to maintain some ridiculous standard of professional creativity in spite of the fact that he’s been given what amounted to “on the toilet” reading material. Firstly he jettisoned the screenplay’s title because…seriously. Star Beast? It’s one letter shy of being its own porn parody. Then Scott made the decision that guaranteed people would be talking about this movie, sleeping with the lights on for months and pathetically ripping it off for years to come. “If we can get the Alien right” he said “then everything else will work.” And so Scott recruited the guy who should seriously get a bigger credit than the writers because of what he brought to the table. H.R. Giger – a man so screwed up that even Charlie Sheen looks at his art and says “Damn…that’s messed up.”

I feed on nightmares.

Everything about this series of movies is what it is because of Giger. His input has been the constant – the one thing that no-one has the gumption to turf.

The first film is a slow, slow, sssllllooooooowww burning survival horror flick that ever so gradually builds up terror, but isn’t above throwing some good, old-fashioned shocks at the audience. The performances are so natural that at times it feels like a documentary (an effect compounded by the film’s scarce score). Of course, not everybody is going to cope with such a ponderous pace, and one or two characters are admittedly a little bit unlikable. But everything about this movie is designed with such gorgeous intricacy – the script, the sets, the props and, of course, the creature – you can tell that people really cared about making this.

And that’s a really good summation of this film – it’s something worth caring about.

But for those who can’t stand getting stuck behind old people with walkers at the shops, the schlubs at Hollywood did actually spend some time in the 80’s making good decisions. Among them was the decision to make a sequel, and another was to put it in the hands of fledgling writer/director Jim Cameron. His film, The Terminator, had just been released and he put forward a convincing case at Fox to give him control. Cameron knows how to make movies – crafting an introduction that moves slowly and purposefully he initially ties his film to Scott’s in an almost spiritual way. Then, when he’s paid homage and set things up and all that stuff… BOOOM! Yes, we get another survival horror flick, but this one’s got GUNS! Cameron wisely chooses to go down a different road to Scott, and plays the horror more like the horror of the battlefield…y’know, when you’re outnumbered, outmatched, outgunned and out-oh crap I’m dead.

This production was troubled by so many factors it’s a miracle that anything got made at all. But the guy was just too freakin’ stubborn to accept anything less than victory dammit! And, once again, we can summarise the film this way – it’ll hammer you in the face repeatedly until it drops… or you do.

Along with the overlooked H.R. Giger there should probably be another two names on the list of directors for this franchise. True, their contributions never made it to the screen but considering that they both gave a year of work to a third Alien flick…

Renny Harlin (Die Hard 2) and Vincent Ward both signed as directors at one point, but by this point the franchise was HUGE, and everyone was a cook in the kitchen. Walter Hill and David Giler, who served as producers in the previous films, knew better than anyone else how to make an Alien flick. Sigourney Weaver had a fair amount of creative control. Everyone who wasn’t on the ground making the picture wanted to tell the guys on the ground how to make the picture. It is into this mess that David Fincher is dragged – first time movie director. The Fight Club helmer had to start principal photography without a script. Let me reiterate that… HE HAD TO START SHOOTING A FILM THAT HADN’T BEEN WRITTEN YET!

“What about the damn movie, Z!?!” I hear you all shouting. Well, let me just say this: I am convinced that everyone was doing their best to make something that would make the studio happy. They’re all trying so hard – actors; director; designers; special effects; score – the whole bit. The result is a movie whose individual  components could be rated highly, but put them all together and you get a mess. Alien 3 couldn’t decide whether it should be hard sci-fi, action, thriller, horror, philosophical or character study – so it decided to be nothing.

But fear not, genre fans! For there is a light on the horizon and it looks… French?

Ah, oui. Alien Resurrection – you’ll either love it or hate it… although sometimes you can do both at the same time. Director Jean-Pierre Jeunet (City of Lost Children) was brought onto the final (sort of) installment of the saga, and with him he brought three things: A messed up European sensibility; favored actor and friend Dominigue Pinon; and the epitome of awesomeness… RON PERLMAN! Who, incidentally, gets all the best lines in this film. Jenuet takes some real risks with this flick, and at the very least I can respect him for that. But more than that, he takes the story in a really different direction by essentially doing everything that the previous Alien films had made every effort not to do. The result is undeniably quirky, but without argument the funnest of the bunch. It’s like after all these years of dank, dimly lit corridors and very loud doors, someone said “Hey, lighten up guys.”

I’d really like to end the review here. I would… seriously.

20th Century Fox own two licenses (count ’em) that were in turn licensed by publisher Dark Horse Comics in the early 90’s. Dark Horse built a significant part of their rep by publishing series based on or tied into popular movies (Godzilla, Indiana Jones and Star Wars just to name a few). The children of the entertainment gods at this company thought for about two seconds before they merged the two newly acquired properties and created a comic run that nearly knocked the world out of orbit from sheer awesomeness (to be fair, our standard were low – it was the 90’s). Aliens vs Predator was a no-brainer – a franchise merger that made more sense than peanuts in chocolate.

It only took the studios another 15 years to figure out that it was a natural progression to make for their cinematic titans. And so 2004 saw the release of the incredibly titled AVP – a film that took everything that was awesome and unique about not one but TWO of the greatest sci-fi monsters of all time, and flushed it down the toilet. so they could make a film about a mountain climber instead.

I have seen this film… please, don’t you do it. Don’t.

They reportedly made another one in 2007, but I’m not sure. I think I’m looking at it, but all I can see is black screen…

How to Enjoy Them

Dress in a black turtleneck and beret and appreciate the beauty of “feelm” on offer in Alien. Then tear off that turtleneck to reveal a jungle camo tank top, cram your Aliens DVD in the machine, and when it gets to that part in the film have everyone yell at the top of their lungs “GET AWAY FROM HER YOU BITCH!”

Now, no word of a joke here, forget about watching Alien 3, and watch the fantastic “making of” documentary instead – it is seriously more interesting and far more entertaining. For a real thrill, watch Alien Resurrection in reverse while listening to Pink Floyd’s “Dark Side of the Moon.”