‘In the year 2149, the planet Earth is a disaster, and most of the plant and animal life has become extinct. Scientists can’t reverse the damage, but have found a way to travel back to prehistoric times to save the human race.‘ 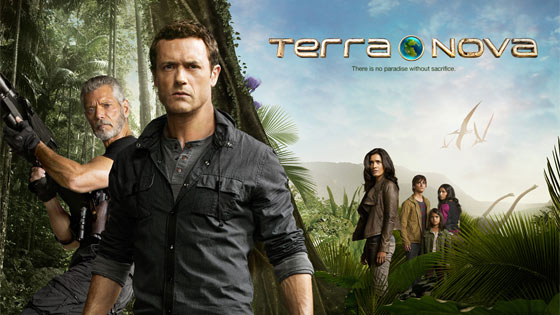 There’s been a lot of buzz building about Fox’s new sci-fi show Terra Nova. Take Steven Spielberg and several other sci-fi veterans, add time travel and dinosaurs, and you seem to have the recipe for a sure-fire hit. Unfortunately, after the disappointment of Falling Skies earlier this year, Spielberg’s name in the EP slot doesn’t do that much for me anymore. There’s a whole bunch of things that need to come together to make a compelling series; dinosaurs aren’t going to keep people around forever.

Thankfully, the team behind Terra Nova seem to have made a pilot that while flawed, has the potential to grow into a great new series. A lot of effort has gone into building the world the show is based in, and the dystopian future of 2149 feels real and interesting. Much has been made of the show’s special effects budget, but those looking for Avatar level effects are in for a disappointment. While Terra Nova‘s budget might have been big, this is still only television and the differences are immediately apparent. While the CGI creations throughout the show are impressive, it’s always obvious what is CGI and what’s real. While I was willing to suspend disbelief for the inevitable dinosaur hijinks, there were a number of green screen panoramic scenes that were obviously meant to be a big deal, but ended up falling flat. In contrast, the physical locations have benefited a great deal from the budget, and they go a long way to making the world believable.

Unfortunately, while a lot of effort has gone into building the world, the story and characters seem to have missed out. The show opens fairly well, with an interesting look into family life in a world that’s slowly falling to pieces, but once everyone travels back in time, things go off the rails a bit. The pilot feels like a simple premise that grew outside of the confines of a 2 hour (1 1/2 with ads) time limit. Characters go from dangerous outsiders to trusted companions in a couple of minutes, and conflicts between characters resolve quickly without any confrontation. The characters are given very little development, at the end of the episode we don’t really know anything more about them then when we first saw them on-screen. There are hints of interesting back story for the characters, and hopefully the rest of the season will be paced a lot better.

One of the biggest problems I have with Terra Nova is the lack of consequences for any of the characters. Similar to Falling Skies, characters continually make rash decisions (which is the basis of many shows), but they never have to pay the price for them. The show’s tagline is ‘There is no paradise without sacrifice,’ but somebody neglected to tell the writers. It seems that nobody can die or be permanently injured unless they are an extra we’ve never met before. This immediately robs the show of any tension, because we know that nothing can happen to our characters. This is something that TV audiences (especially Sci-Fi audiences) have grown past. While we always hope that our heroes will get out of a terrible situation, there is no suspense unless we also have the fear that they won’t.

When I see a character run stupidly into the middle of a forest full of lethal dinosaurs, I expect them to die. Anything else is just pulling me out of the experience, and reminding me of the rules that the writers have decided to play by. And when a mystery is set up that looks like it will be a big part of the season, I don’t want to see exposition at the end of the episode explaining everything. That kind of defeats the purpose of having the mystery in the first place.

Overall, Terra Nova shows a lot of promise. If they take their time to build the characters and the world, then it could grow into a great new show. But if they don’t fix the obvious problems and create a little tension, it’s likely to become a very expensive and flashy addition to Fox’s sci-fi graveyard.

What I Didn’t Like – Far too rushed. Shallow characters. No consequences.