‘Dragon Age: Redemption is a six-part web series set in the world of the EA/Bioware RPG Dragon Age. The series tells the story of Tallis, an Elvish assassin, who gets a last chance at redemption when she’s sent to capture a rogue Qunari mage intent on wreaking havoc in the world.‘ 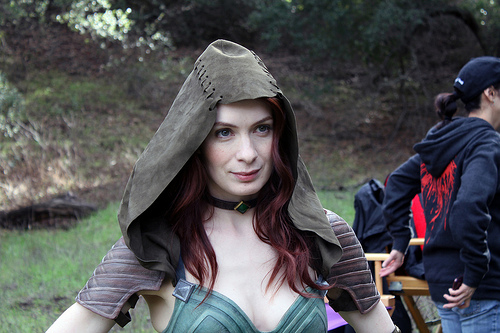 Dragon Age: Redemption is certainly an impressive achievement in web video, but thankfully it’s also really enjoyable to watch. Each episode has built nicely on those preceding it and it feels like a nice coherent experience, even though it’s being delivered at the rate of only a few minutes per week.

The party building aspect of the series feels true to the games, and you can really see yourself playing Dragon Age with these companions (you can already play with one of them). The banter between each of them feels natural and true to their characters – there is little evidence of the sometimes awkward dialogue that marred the first episode. Day has also done a great job developing each of these characters with little hints dropped throughout the dialogue. All of the characters feel like archetypes from the genre, but they are each played so well that they feel interesting and fresh.

The party’s newest member, Josmael (Masam Holden), is a wonderfully naive character that had me shaking my head along with Tallis and Cairn. You just know that he’s going to cause trouble at some point. The special effects that were used in this episode for his magic won’t blow your mind, but they look pretty good for such a low-budget production. At the end of the day, all that matters is that the audience is convinced that the flashy stuff on-screen is doing what the characters say, and Redemption manages to pull this off nicely. Players familiar with the game will get a kick out of seeing real actors react to some of their favourite spells.

The locations used for the series continue to impress; at no time does this feel like a set or even a backlot. The wonderful environment goes a long way to selling the universe, and when combined with the consistently great costumes it’s not hard to believe that this is the world of Dragon Age. Unfortunately, the opening text at the beginning feels like it should have stayed in the video game world, it detracts from the episode, depriving the world and characters of the chance to convey the information without exposition.

One other problem I had with this episode relates to characters (particularly the bad guys) making obviously stupid decisions. This is a trademark of the genre, but I feel that there are ways to make these decisions less obvious. I can’t go into it too much without spoiling things, but I think that characters in this universe would be likely to take any opportunity that presents itself.

Dragon Age: Redemption continues to improve with each episode. While there are still flaws here and there, overall the series is a lot of fun to watch. It’s sad that we’ll only get to see six episodes of this series, the concept has plenty of potential to support a full length season.

For those of you interested in more behind the scenes information, Felicia Day will be hosting a live chat tomorrow in Vent. You can find the details over at her blog.

What I Didn’t Like – The introductory text still feels unnecessary. Some plot holes.