‘Californication returns and picks up two and a half years after Hank departed Los Angeles with Karen leaving him for another guy and moving on.‘

People could be forgiven for thinking that the Season 4 finale of Californication – And Justice For All was meant to end the series. The major story arcs had been wrapped up and it looked like Hank Moody might finally be ready to get on with his life, driving into the sunset with his typewriter in the backseat. But no series as popular as Californication is allowed to rest on its laurels, every last penny has to be squeezed out and so we have JFK to LAX, the premiere for a fifth season of a show that seemed to have said all it needed to.

Season 5 picks a few years down the road with Hank living back in New York with a new girlfriend, a new book on the bestseller list and a new appreciation for how unhealthy his relationship with Karen actually was. But the more things change, the more they stay the same; Hank’s love life is quickly revealed to be as turbulent as ever and he quickly flees back to the relative safety of LA when presented with the opportunity.

After the inevitable sexy encounter on the plane trip over (a painfully obvious setup for future liaisons), Hank wastes no time in catching up with all the other characters, filling us in on what’s been happening for the last few years while demonstrating the characteristic that has made Californication so much fun to watch in the past – the character interactions. While every character in this show is weird in so many ways, they feel like real people and watching them laugh and play together is a joy to watch, the dialogue is as crisp and raunchy as ever and while many things have changed, we can see that these people all still care deeply for each other.

Unfortunately, that’s part of the problem. While Hank seemed to have moved on at the end of Season 4 and Karen has settled down with the white picket fence, there were plenty of hints that the continual war of emotion between the two of them is due for another outbreak this season. I realise that Hank’s relationship with Karen is one of the most important aspects of his character, but at this point it really feels like the show would be retracing the ground that has already been covered ad infinitum during the previous seasons. I might be reading too much into the short time that they had on-screen together, but it tied into my main concerns about the show as a whole. 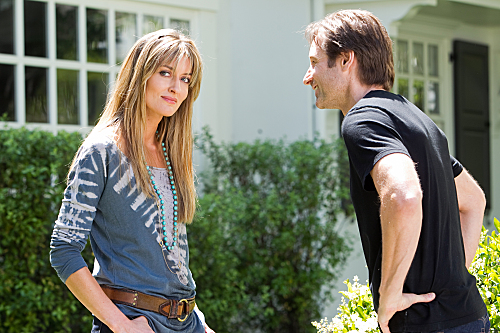 The show needs to grow beyond this.

There are only so many times we can see Hank become ready to grow as a person then resetting completely before it becomes boring. This was one of the reasons that the show suffered so much during the third season; it was only when Hank was forced to confront his actions in court during season 4 and actually show some signs of growth that things started to get interesting again. A lot of the maturity that Hank showed at the end of season 4 is still in evidence during this episode, but it was undercut by some of the sillier moments. I’m not advocating that Hank’s character should change completely, but a better balance needs to be found in order to keep him interesting.

Overall, I’m cautiously optimistic about Season 5. Even though I was satisfied with the way that Season 4 wrapped everything up, I’m curious to see what the writers have in store for Hank in the future. As long as they don’t start telling the exact same story again, the show looks to be one of the more enjoyable things to watch over the next few months.

What I Liked – Great character interactions. Hank’s character arc actually seems to have progressed a bit.

What I Didn’t Like – The setup with Kali felt obvious. Hints that things may start going in circles again.

Next Episode Review – The Way of the Fist

One thought on “Californication – JFK to LAX Review”