‘Intrepid reporter Tintin and Captain Haddock set off on a treasure hunt for a sunken ship commanded by Haddock’s ancestor.‘

The story of The Adventures of Tintin‘s development is long and convoluted, but we finally have a big screen adaptation of the comic that has been a favourite around the world for over 80 years (although I was always more of an Asterix and Obelix fan myself). Tintin has always been a fun character, working his way through adventures that Indiana Jones would be proud of with his trusty sidekick Snowy and it is only fitting that Steven Spielberg be the one to adapt it.

Spielberg first found out about Tintin when a review of Raiders of the Lost Ark compared the film to Herge’s famous comics and now that Spielberg has had a chance to get his hands on the character, the comparison is even more apt. The Adventures of Tintin is a fun action film that perfectly captures the excitement and slight silliness of the serials of yesteryear. Spielberg’s talent for directing action is well displayed throughout the film (with the exception of a few disorienting shots in the opening) and the decision to use animation allows him to get away with a number of physically impossible sequences that propel the audience through the film at breakneck speed.

Unfortunately, the quick pace of the film means that the characters don’t really have all that much time to be fleshed out. After a very brief introduction, the film lurches from one action sequence to the next with hardly any time to breathe. It makes for an enjoyable and compelling movie, but there is something lacking that holds the film back from being truly great. All of the characters look fantastic (although a little rubbery at times) and their key mannerisms are front and center, but I feel that anyone unfamiliar with the comic will be a little lost at sea. 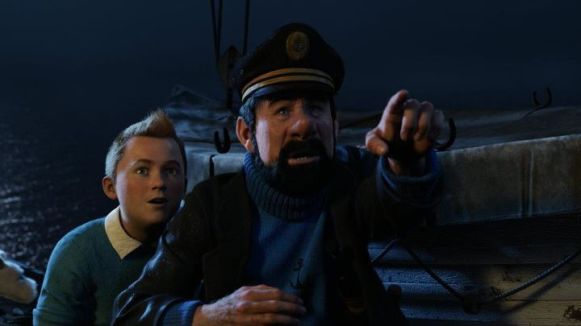 Spielberg has captured the feel of the comics perfectly, but some of the elements have made the transition better than others. A comic can get away with action that is impossible to do on the screen (unless you use animation) and it also has the benefit of being able to show the character’s thought process in clear text. This is something that is virtually impossible to duplicate well on film and so we are left with Tintin (Jamie Bell) talking to himself constantly; dumping all the important plot information onto the audience in a big expository monologue. It is certainly not as bad as it could have been (constant voiceover for example), but it is jarring and I wish that the writers had come up with a better way to convey the necessary information.

Overall, The Adventures of Tintin was an enjoyable adventure film that I would have no hesitation in recommending to people of all ages. The transition from printed media to film is always a difficult one and there are bound to be mistakes but I look forward to seeing what Peter Jackson and Steven Spielberg can do with the future Tintin films after establishing this solid foundation.

Note: I saw this in 2D (as I try to see most movies) so I cannot comment on how well the 3D effects worked.

What I Liked – Fun cartoony action scenes. Good sense of humour. Captured the feel of the original comics.

What I Didn’t Like – Lack of tension. Some awkward exposition. Characters a bit thin. Some disorienting camera movements.

2 thoughts on “The Adventures of Tintin Review”