‘Hank turns down the job to write Samurai Apocalypse’s new movie, but Sam refuses to take no for an answer and takes Hank to a meet with director Peter Berg, where they discover that Hank and Peter have shared more than just a love of writing.‘

After a season premiere that left me with an equal mix of hope and concern for the upcoming season, The Way of the Fist plays it safe and tells a fairly low-key (for Californication anyway) story while setting up several plot lines to spice things up over the next few episodes.

There isn’t really all that much to complain about with this episode; the humour is its usual mix of smart and disgusting, the characters all seem to be playing well off each other; but there isn’t anything to really be excited about either. The Way of the Fist felt like it was just treading water, giving us another week of the same old thing while we wait for the big season shock moments to start popping up.

This episode was at its best with the things that it didn’t do. We didn’t see Hank revert to pining over Karen yet again, the few scenes of them together showed the more mature relationship that they’ve developed – united in caring for Becca – and the show was better for it. We also didn’t see Hank jumping from bed to bed to shove some titillation into the episode either (apart from a dream sequence tied to the main plot), showing us that he might actually be moving on in his life.

That’s not to say that Hank doesn’t still have a talent for finding trouble, that would be completely out of character. His deadpan reaction to the antics of Samurai Apocalypse’s entourage was some of the best humour in this episode and the foreshadowing of the inevitable consequences resulting from an affair with Kali adds a nice level of anticipation for future episodes. 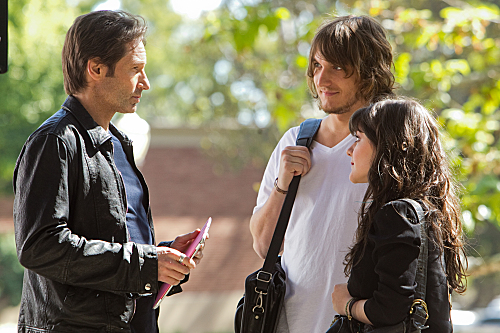 One of the key themes of this season seems to be how Hank’s past keeps coming back to bite him, despite his efforts to improve his life and relationships. David Duchovny does a great job in his scenes with Tyler (Scott Michael Foster), showing how hard Hank is trying not to punch what could easily be his younger self in the face every time they meet. This conflict adds a great deal to his relationship with Becca (Madeline Martin) who had grown a bit annoying over the last couple of seasons as the writers didn’t really seem to know what to do with her.

Overall, while the episode wasn’t really bad in any way, it was completely unmemorable. The advantage of a 12 episode season has usually been to remove filler episodes, but that’s essentially what The Way of the Fist is. There are a couple of important setups, but anyone who skips this episode will likely get the same information from the ‘Previously on Californication‘ segment at the start of future episodes.

What I Liked – The conflict between Hank and Tyler. The story seems to have moved on from Hank and Karen.

2 thoughts on “Californication – The Way of the Fist Review”