‘Under Spartacus’ leadership a villa is liberated. Oenomaus, however, decides to throw himself into the brutal pits.Despite his wife’s protests Glaber decides to support Lucretia’s prophecies.‘

While the opening of the second (Gods of the Arena was a prequel) season of Spartacus felt like it was trying to play catch up, A Place In This World seems to be laying the ground for things to come. There were some fantastic moments in this episode, but the pacing of the show is suffering from needing to cover too many characters. One of the strengths of the previous series’ was the focus on a very small group of characters that audiences grew to love (or hate) with a passion.

These strengths were on good display at times in this episode with one plotline fleshing out Oenomaus’ back story through a series of memories that mirrored his current situation. Oenomaus (Peter Mensah) has been one of the strongest characters right throughout the show, but he remained a mystery until we saw something of his life during Gods of the Arena. In A Place In This World we get to see how he grew from a wild young boy into the epitome of honour and strength that he is today, revealing just how far he has fallen since the slave rebellion. His dual storylines are the perfect demonstration of this episode’s central theme: ‘What price, freedom?‘

Oenomaus isn’t the only one struggling with this question, every former slave’s storyline ties into this theme in one way or another. Mira (Katrina Law) is conflicted over her relationship with Spartacus; Does she love him? Or is she just bedding him for protection? Every slave has their own way of dealing with the sudden freedom that has been thrust upon them, some better than others. Liam McIntyre continues to impress with his portrayal of Spartacus who is just starting to learn about the chaos that he is unleashing in so many people’s lives with his crusade. His noble quest to free slaves ignores the fact that some of them might not want to be free. 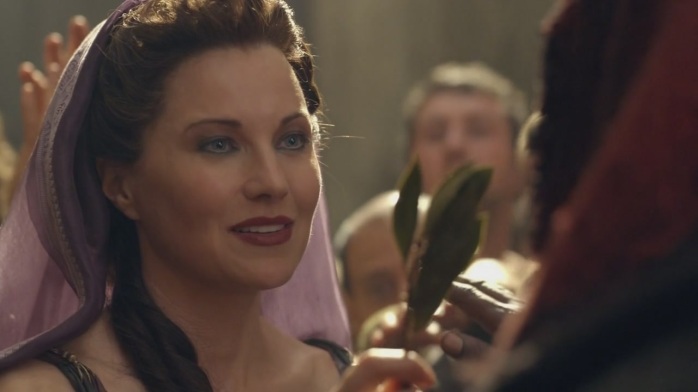 On the Roman side of the story there is a great deal of political maneuvering going on, and most of it seems to be centred around Lucretia. Lucy Lawless reminds us in this episode just why she has been so much of a joy to watch up to this point. Even when Lucretia seems to be at rock bottom, you can be sure that she has something up her sleeve. Her mad/cunning act in this episode keeps everyone off-balance, particularly Illythia, who seems to be conflicted with her own memories of Spartacus. Illythia is such a wonderfully despicable character and it is a joy to see her constantly off-balance here. While it is great to see these strong female characters in a show that could easily abe ccused of objectifying them, it comes at the cost of any significant role for Glaber, who is supposed to be the main villain of the piece. While Craig Parker continues to give a good performance, his character seems to have nothing to do except lurk in the background while Lucretia steals the show. I hope that the writers can find some balance that will allow Glaber to step up without overshadowing any of the other villains.

Overall, while the show is still enjoyable, it feels like the creators are holding back to draw things out. I love season long story arcs, but each episode needs to stand on its own merits as well, providing a self-contained hour (minus ads) of entertainment. Things seem to be shaping up for a great season (particularly after that last minute reveal), but I hope they don’t string the audience along for too much longer.

What I Liked – Oenomaus’ back story. Theme tied into all storylines. Nice reveal at the end.

Next Episode – The Greater Good

One thought on “Spartacus: Vengeance – A Place In This World Review”