‘Mass Effect 3 plunges you into an all-out galactic war to take Earth back from a nearly unstoppable foe – and how you fight that war is entirely up to you.‘

Around 7 years ago I remember talking to a friend in the industry about the possibility of a Knights of the Old Republic 3 from Bioware; continuing the fantastic franchise and making up for the terrible ending of KotOR 2. ‘Not going to happen,’ he said. ‘They’re working on their own sci-fi IP instead.‘ We talked for a while about what a stupid idea this was. Why start something completely new when you have such a fantastic established universe to play with? In 2007, we learned why.

The Mass Effect series has been one of the most successful RPG franchises ever made, with good reason. The first game introduced us to a wonderfully rich and deep universe to play in; full of compelling characters and decisions. Things only got better in 2010 when we learned exactly how important those decisions were. Virtually every conversation in the game changed some aspect of the universe, and Bioware promised that this trend would continue into the final part of the trilogy, allowing each player to create a very unique experience based on their decisions and play style.

Expectations for Mass Effect 3 were running so high over the last few months (especially after the initial release date delay) that it was almost inevitable at least some disappointment would follow. But I don’t think anyone was expecting the level of vitriol that erupted over the last week on forums and gaming sites right across the globe. So is Mass Effect 3 as bad as you’ve heard? In a word; no – but it does have more than its fair share of problems.

Oh, looks like you’re about to win the fight. Time to crash.

Firstly, the technical problems. I lost count of how many times this game crashed on me. After running through the usual methods of improving stability I quickly learnt that there wasn’t much I could do about it. The game just seemed to crash when certain events would happen. On many occasions I had to keep re-fighting a battle until I could find the one path through the battlefield that wouldn’t lock the game up. In addition to the basic frustration of having to restart the program, this completely broke the flow of the most dramatic battles within the game, severely detracting from the experience.

These aren’t the sorts of problems that you expect to encounter in a game with a huge QA budget running on a tried and tested game engine*.

In addition to the major technical problems, there are also a number of graphical glitches that keep showing up. Characters will suddenly shift to a new position during a conversation or sometimes disappear completely and there are a number of texture and clipping issues on the character models. None of the graphical problems are a game breaker, but they do pull you out of the moment. 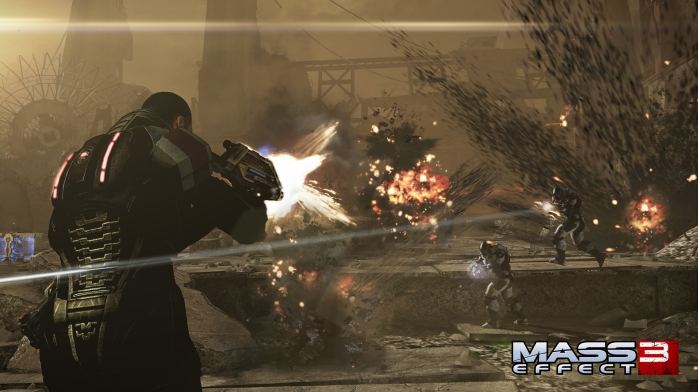 The scale of battles has increased dramatically.

Water-cooler moments are what this game does best. Right from the very beginning, Mass Effect 3 throws you into one crazy situation after the next; pitting you against armies, colossal war machines and a rapidly disintegrating environment. In addition to the crazy battles you have to fight, there are a number of intensely emotional encounters with former friends and enemies that give the player a series of laugh and cry moments that will stick with them for a long time.

The game is a series of very impressive set pieces and encounters, but I think that’s part of the problem. While most of the individual parts are very distinct and exciting, they didn’t really feel properly tied together.

Despite containing many hours of gameplay, the number of major story missions is relatively small, leaving a large percentage of a 30+ (complete) hour play-through devoted to the many side quests. Side quests are an integral part of most RPG’s, but in Mass Effect 3 they often end up feeling like a chore. In the previous game, players would fly around the galaxy scanning planets and occasionally finding new missions for the player to go on. This gave an incentive for the player to explore, they never knew if the next planet would contain something new or not.

In comparison, 99% of the side quests in Mass Effect 3 are obtained by walking around the Citadel and overhearing conversations that trigger a little quest pop-up at the bottom of the screen. The player then has to fly to the designated area of the galaxy and scan the system until they find the appropriate object. Commander Shepard never even leaves the ship; just picks up the item and hands it back to the right NPC (meaning he has to return to the Citadel). While the new scanning mechanic works well with its risk/reward system of scanning without alerting the Reapers, it quickly becomes tiresome and removes any aspect of exploration from the game. 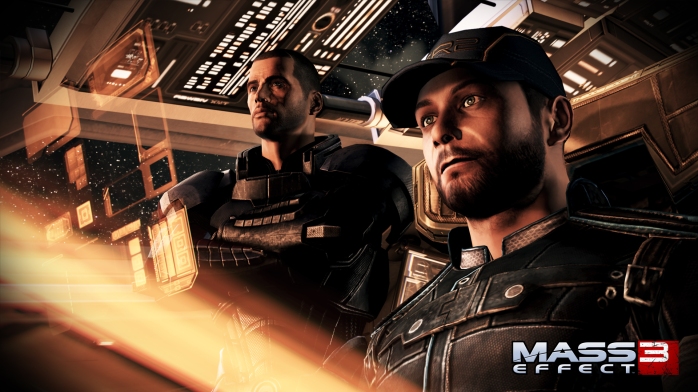 Back to the Citadel. Again.

One benefit of the incessant walking around the Citadel is the extra atmosphere that it gives to the game. As the war with the Reapers progresses, the galaxy becomes more and more desperate. Some of the conversations that can be overheard are heartbreaking stories of loss that really hammer home the effect that your war is having on the average people of the galaxy. The rich universe that Bioware has created with this series is one of the game’s biggest strengths and it really adds to the experience when you hear people talking about the repercussions of your actions. Combined with the many meetings you have with former comrades, the atmosphere of the Citadel made me feel like I was a part of this universe to an extent that I haven’t felt before.

Which brings me to the ending. Like many players, I have poured more hours than I’d care to admit into this series and I’m very invested in the characters, the story, and the universe of Mass Effect. I’ve agonised over every tough decision, knowing that it would have repercussions throughout the rest of the series. The Mass Effect series has been the only (in my memory) game trilogy that has allowed you to dictate events (to an extent) right from the start, influencing how each subsequent game would play out. That is why so many people are baffled at the decision by Bioware to completely invalidate all of that choice and funnel the player into one final conversation that gives three virtually identical options for ending the game in a similar fashion to Deus Ex: Human Revolution.

While this worked (sort of) for DE:HR, the Mass Effect series has always been about your choices and how they change the universe. To have all of that choice mean virtually nothing in the end is completely counter to the spirit of the series and it is understandable that many people are upset. I can’t really say more without spoiling anything, but the biggest slap in the face was when the game finishes its post credits cinematic with a message telling you to look out for DLC that will continue Shepard’s adventures.

Please insert $10 for the ending.

I haven’t been one of those people jumping on the ‘hate Bioware’ bandwagon about the From Ashes Day 1 DL;, I actually felt that it was a nice bonus for buyers of the otherwise disappointing Collector’s Edition (which I bought). But leaving such a massive series on a sour note (think KotOR 2 ending RPG fans) and then popping up with a happy message promising better things for more money really felt like a cash grab. Bioware as a company is entitled to make as much money as they can, but alienating your fan base is a sure way to lose money over time.

Overall, Mass Effect 3 is a game full of fantastic characters and set pieces, but feels a little unfocused overall. If you can get past the technical problems, it is well worth playing, right up until the last five minutes. I don’t think that the ending spoiled the whole series, but it does make me reluctant to start another play-through. It will be interesting to see what DLC Bioware comes out with for the game over the next year, I don’t think we’ll see the equivalent of Fallout’s Broken Steel but hopefully fans will be able to get a bit more closure.

What I Didn’t Like – Buggy. Poor pacing. Tedious side quests. Unsatisfying ending. Influence of multiplayer on single-player campaign**.

*Game stability will obviously vary on different PC setups, I can only speak to my own experience with the game.

**Given the length of the review I will cover the Multiplayer in a seperate article.

Though I’m usually not a big meme guy, this video nicely sums up a lot of the feeling about Mass Effect 3. Warning, contains spoilers.