“This is it, the final battle. Nobody’s ever faced odds like these before, and for good reason; any smart man would call this mission suicide, but it has to be done. The fate of the world is riding on our shoulders people, if we don’t succeed here, there won’t be a home to go back to. Are you ready? Great! You two come with me, everyone else stand over on the sidelines while the three of us take on these ridiculous odds. Let’s go!” 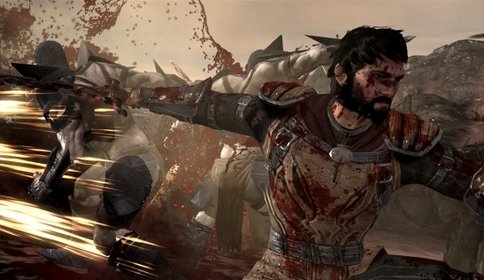 Seems crazy doesn’t it? But time and time again players are confronted with this scenario in role-playing games. The fate of the world hangs in the balance, but they’re forced to tell most of their party to stay behind and take it easy while the player takes a couple of companions on a suicide mission. It’s become such a common part of these games that a lot of players barely even bat an eyelid when this happens – it’s the norm rather than the exception.

We all know the reason; it’s a video game and all of the fights are based around the player having a 3 character party, if they could bring everyone along the game would be completely unbalanced. But RPG’s are a story driven genre, and from a story perspective, the decision to leave everyone behind doesn’t make any sense. So I’m going to ask the question:

Why can’t I take my whole party with me?

There are some games who have managed to involve your whole party without sacrificing the core mechanics of the player’s main party, even if only for one or two missions. Mass Effect 2‘s final missions are a perfect example of how much a game can be improved by involving every character. The Normandy has crashed on the Collector’s base, and your team needs to get through the station to blow-up its power supply and rescue your abducted crew. The only problem is your path to the central chamber is blocked. So you need to send a tech expert through a ventilation shaft to open the doors, and split everyone else into two groups to keep the enemy’s attention away from your hacker.

Who do you choose?

Immediately, this feels more like a real mission than anything earlier in the game. Everyone’s involved now. You’ve spent the game getting to know these characters; their strengths and weaknesses. Having spent the entire game with them, you should know who is the right choice for each task. The game does an excellent job of backing this up with consequences; if you don’t pick a party member with the right technical skills, they won’t be able to hack the doors quickly enough to save everyone. Likewise, if you don’t pick someone with the right leadership skills to lead the second fire team, not everyone is going to make it. Your mission still plays exactly the same – you control Commander Shepard and two squad-mates, but you are talking to the other characters as you progress through the mission and they’re involved every step of the way rather than just being forgotten about until you get back to the ship. 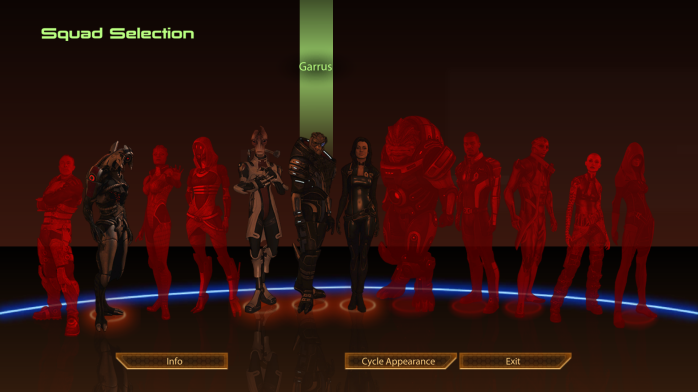 The developers spend so much time creating these awesome characters, only to have them sit around the ship most of the time. Imagine if every mission played out like the end of Mass Effect 2. If instead of just taking two people with you to assault a geth infested ship on Tali’s loyalty mission, you send teams to other critical parts of the ship while you go for the main objective. You’re in constant communication, and the teams helps each other out along the way. The gameplay remains the same, but everyone’s involved now; the team you are building is actually working as a team rather than a substitute bench for the main show.

Splitting off your party into teams is a great way to keep everyone involved, but it also comes with the drawback that you miss a lot of conversation between the party members you have with you, and their comments on what’s happening in the story. One way of getting around this was used to great effect in Final Fantasy X. In that game, all the party members were considered to be with you at all times, and whenever there was a conversation, everyone was involved. This was obviously made easier with the JRPG style of cut-scene driven storytelling, but the principle was sound. Every character was there to protect Yuna on her pilgrimage, so there’s no reason that they wouldn’t be around when any of the story events happened.

Even when they stop to look at the pyreflies.

This presents the usual problem of balancing a game with 6 or more party characters in every fight, but Final Fantasy X got around this by having the player control 3 characters at a time during a fight, with the other 3 ‘guarding their backs,’ essentially pulling them out of combat. Players could swap out characters during a fight, at the cost of forfeiting an attack for that round. While this would make it harder for developers to balance enemy encounters, it’s not nearly as bad as needing to balance against the player controlling every character in a fight. 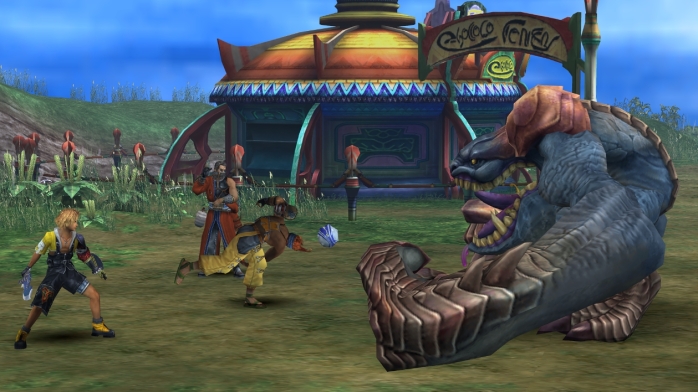 Combat is still a challenge.

By involving all of the characters throughout the entire story, Final Fantasy X ensures that the player is invested in them. When Wakka and Lulu finally get together, the audience cares because they have seen the pair dance around each other throughout the entire game, never ready to admit their feelings. When Auron fades away, it hurts because he’s been an indestructible pillar of strength since the beginning. If most of these characters had spent the game twiddling their thumbs in a camp, why should we care about what happens to them?

This became particularly apparent when I started playing through Neverwinter Nights 2 with a mod that allowed me to take as many party members as I wanted with me. Instead of leaving my least favourite characters back at the party base while I adventured with my chosen few, I suddenly had a huge group of people who argued with each other, and wanted to give me their conflicting opinions on current events. Characters that I had previously found boring or annoying suddenly became fully fleshed as I spent more time with them, and I found myself caring about what happened to them. 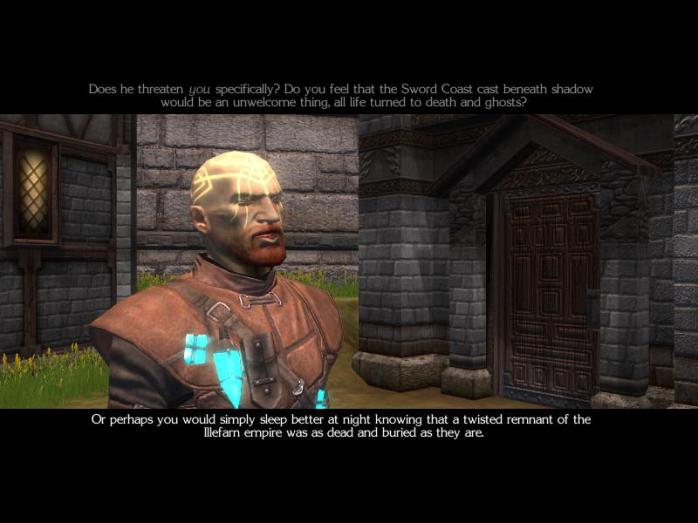 Combat was completely unbalanced of course, there were very few monsters that could stand up to a party of 10 level 18 characters, but the game was more fun than ever. I no longer had to worry about which combinations of characters would work best, I had gathered this party, and they were with me every step of the way. This added so much more impact to the end of the game when each of them had to choose whether or not to betray me. Our characters had just spent 30+ hours together, and every decision I had made led into that moment.

I have since replayed Neverwinter Nights 2 many times, but I can never go back to playing without that mod. Without all of those characters, the game is a shadow of itself and it’s sad that I’m forced to modify the game to get the best possible story experience out of it. You will often find fans arguing about which companion characters are the best for any particular game, and I find myself wondering how many of the ‘boring’ characters would become fan favourites if players actually had to spend the whole game with them.

While some may disagree, I maintain that RPG’s are all about the story. Levelling and gearing up are important aspects, but the genre as a whole is about putting you in the shoes of a character, and experiencing their story. Planescape: Torment is a perfect example of this; it is held up as one of the greatest RPG’s ever made, but even its greatest fans admit that the combat and other mechanics in the game were not particularly interesting or fun. The game is about learning who the Nameless One is, and it is this nuanced story that still keeps players coming back today.

Nameless is just this guy. You know?

As any writer will tell you, a story without interesting characters is a bad story. A story can have the greatest universe ever created, but without characters in there to give it context it’s about as deep as a pencil sketch. Players form their opinions of factions and people in the story by seeing how their companions deal with them. After all, the player is a newcomer to the world and they have no preconceptions about anything. So when a character that they have grown to love expresses an opinion, the player is likely to agree with it. So why do games keep robbing the players of the means to understand the world the developers have created? Why are we still stuck with these awkward mechanics of the small party?

Some say that by denying players the opportunity to play with every character, they add replay value. But this is fundamentally the wrong approach. You don’t punish your players to keep them coming back, you give them such a great experience that they want to come back and do it again? The story of the game should be good enough incentive for a player to come back. People don’t re-watch Star Wars for the 100th time because they want to see if it plays out differently, they watch it because they want to feel that sense of enjoyment again. This should be the goal of any story driven game.

I wonder if Obi Wan will win this time?

It’s time that we started approaching RPG’s with a ‘story-first’ doctrine. If the writers have come up with 6 awesome companion characters, the game should work in such a way that the player gets to spend the entire game with those characters (unless they’re taken away for story reasons). This creates greater immersion for the player, as well as ensuring that the developers create the best possible characters, because the player is going to be spending the entire game with them. When the inevitable sequel comes along and a character says ‘remember when we did that cool thing together?’ there will no longer be that awkward moment of thinking ‘No, because I didn’t take you on that mission.’

Wouldn’t that be nice?