Since I am staunchly opposed to the imbibing of perception-altering psychedelics, and I never went to uni, I have been saddled with an unshakably clear vision of reality that occasionally lacks the vibrancy of color and the growing sense of unease leading to panic and terror.

Bat… wait. Is that a freaking dragon?!?

…I seriously cannot fathom how drugs top this.

In the years following WWII – an era during which every comic publisher strove to depict their heroes punching Hitler in the face – the mandate was passed down from the on-high-editorial staff at National Comics: enough with the grim crime stories already!

Last time I mentioned that Batman was originally conceived as a vastly more time-efficient crime fighter, since he employed deadly force at the drop of a hat. The last straw for the editors came in the first issue of The Dark Knight’s solo series (cleverly titled Batman), in which Martha Wayne’s little boy lets loose on a bunch of bad guys with an unhealthy dose of hot lead. (note: this behavior was displayed in the comics even after the introduction of the Watson to Batman’s Holmes, Robin the Boy Wonder. Robin belonged to the early days of Batman, being dreamed up by Bill Finger, and was constant witness to Batman’s… what should I call it? Well, Bat-brutality I guess) After the release of Batman #1 the word was given: Batman does not kill… anymore.

So, for those of you playing at home, one of the most defining traits of the Caped Crusader for more than 60 years was not “character development”, it was editorial mandate.

The postwar era signalled a change in tone across the entire line of National’s publications. Most pertinently this meant that the Superhero set now found themselves shut out of the real-world issues which had marked their debuts – dealing with crime rings, protection rackets and union disputes – and instead immersed in a reality wholly fantastical and more than a little surreal (as evidenced above). It would not be uncommon in this time to see Superman sporting a giant red ant head, or to browse an issue of Batman in which the eponymous hero proclaims on the cover “Yes, Robin, I’ve become a human fish.”

The wacky 50’s would serve as a wonderful introduction to a far more familiar rendition of the Dynamic Duo.

While not at the top of their line, Batman was always a steady seller for the company soon to be known as “DC Comics”. In 1965 – riding a surge in popularity somewhat based on showings of the 1940’s serials – producers with the ABC got a Batman television series off the ground.

The full history of this series – the negotiations of the characters, casting, behind the scenes shenanigans – are the stuff of legend, documented in star Burt Ward’s autobiography Boy Wonder: My Life in Tights and in a 2003 telemovie Back to the Batcave: The Misadventures of Adam and Burt. The flick is worth a look if you can find it somewhere. The Batman  show was nothing short of a phenomenon, running for three seasons and a feature film before wrapping in 1968. The show portrayed Batman and Robin as being deputised by the Gotham police, willing to put their own well-being at risk to ensure public safety. Mention was never made of Bruce Wayne’s or Dick Grayson’s deceased parents, and matters of the house were overseen by the making-sure-no-one-is-gay character of Aunt Harriet. While the portrayal of Batman as an ideal citizen was in common with the comics of the 50’s and 60’s, much of the series kind of flew on its own momentum.

On a personal note, I would just like to point out that while – purely in hindsight – the series may be pants… but the car bat-kicked seven kinds of arse.

Less well-known is the encore appearances by the very same Dynamic Duo in two televised specials produced by Hanna-Barbera and aired on NBC in 1979. Showcasing not just Batman and Robin but also the Huntress, Green Lantern, The Flash, Black Canary and Captain Marvel, Legend of the Superheroes was a fairly typical, if bloated, episode of Batman with abundant guest stars.

The brilliant move was to bring television host Ed McMahon on board for the “sequel”, and just make it an outright roast of the beloved characters (with presumably somewhat tamer language than Comedy Central). This show is reputedly actually pretty funny – while I have seen pics of both, I have never seen either in their entirety. Challenge is made, friends.

It is, of course, now pop-culture legend that the portrayal of Batman and Robin in the 66-68 series was so kitsch and campy, and so much an international hit, that the public would have a hard time seeing the pair as anything other. Legions of comic book readers could also thank the show for indelibly labeling comics as forever juvenile. 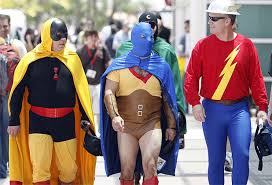 This is, perhaps, not entirely unfair to say.

In the early 60’s the books, however, were already beginning to drop. Maybe the overexposure of Batman on television was a contributing factor (why buy the books when you can watch the show for free), but whatever the reason, a new change in senior editorial staff decided that it was time for Batman, Robin, Gotham, and the whole crime-riddled mass to grow up. This would lead to a new tone for the Bat-books, a ruthless excising of the supporting cast of characters, and most importantly a new design for the Man himself.

A duo almost as mighty as the stars of the book themselves, the writer & artist team of O’Neil and Adams reinvigorated the flagging comic franchise. Gone were the rainbow beasts, space journeys and Bat-hounds (though I do kinda miss that fella), and in was a whole new status quo. The emphasis was placed heavily on Batman’s skills as a detective, and in part was something of a crime procedural, only with more fist fights. Just think, if Law & Order only starred Ice-T, and he had to wear a mask all the time.

Denny O’Neil and Neal Adams breathed a new life into the Dark Knight, and brought genuine depth out of the supporting characters and even the enemies he faced. Their contributions completely rewrote the book on who Batman was as a character, and has set the standard for nearly 50 years… at least as far as comics are concerned.

Of course, there’s plenty more to come. Next time we look into the Batman which, while intended to be only an offshoot of the franchise for the kids, often times turned out to be the best damn Batman of all.

Check back next week for Part 3.