Although I rarely indulge these days, in the not-too-distant past I was something of an avid gamer. I suppose for most of my generation that’s more to be expected than not, but I should be honest and upfront about the fact that, while enthusiastic, I was never very good. ‘Good’ is probably a subjective term anyway, but certainly from the point of view that I rarely, if ever, actually played a game through to completion. Notable exceptions include Mass Effect (1 & 2), Uncharted 2: Drake’s Fortune and Diablo. Just the original mind you, even though Diablo 2 probably stands as my favourite game of all time, and certainly holds the record for most number of hours clocked.

You see, my inherent problem when approaching a video game – one which hardly manifests in any other aspect of my life – is a kind of obsessive perfectionism. This can be traced all the way back to the earliest games I remember playing – an ancient MS-DOS platformer titled The Adventures of Captain Comic. 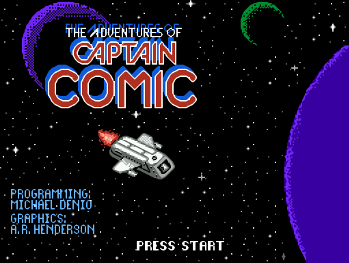 and if I’ve just hit a nostalgia button for anyone, then you’re welcome

This charming little game contained a particular mechanic that drove myself crazy over. Like many of it’s type, the player character loses “life bars” when he hits a monster. Scattered throughout the game are a number of shields (literally, medieval shields) which can restore the Captain to full health. If, however, you can reach a shield while still at full health, you gain an extra life. Now, this was a game with no save options, so building in mechanics to allow the player greater chance of finishing the game is very thoughtful of the programmers. To my young self, all of seven or eight years old, the idea of completing the game with a “perfect” run became a fixation. I did not matter how far through the game I would progress, the moment I hit a monster and lost that very first, precious life bar, I hit that Reset button (or rather series of buttons that accomplished the same result).

Many moons later, while questing as a Druid through the conflict-ridden world of Sanctuary, I found myself still fixated on some intangible concept of a “perfect game”. I am aware that there were games I could have played to which this term may have applied, but I didn’t want to play those games. I wanted to play Diablo 2. So it was that I must have completed Act 1 on at least forty occasions, but only saw the opening of Act 5 once. Anytime the going got too tough, or I found myself wishing I had chosen a different talent or spell tree for my character, back to the beginning I would go. In story terms, while the rest of the world may have been overrun by the forces of darkness, that first encampment was well protected by my obsessive avatar.

Why am I reflecting on this now?

It has become apparent to me over the past few months that this peculiar pathology may not be so unique to myself after all. Do any of you out there see yourselves in my younger, gamer-self? Does this only apply to gaming? That’s the real question, and I’ve started to realise that my answer is…no, I don’t believe it does.
Ever since 2008, and the anvil-drop arrival of Iron Man, I have watched with awe and wonder at the pop-culture arms race that ensued between Marvel Studios and their “Distinguished Competition” over at Warner Bros. As a died-in-the-wool DC man from way back, I like many others hoped to see a shared cinematic endeavour that rivaled the juggernaut heralded by RDJ. Like many others, I was initially disappointed that their first effort was…okay (I am actually something of a Man of Steel apologist, but that’s for another article). This disappointment blossomed into bewilderment at the chaos of BvS, and by the time we arrived at Suicide Squad…

I was begging for a do-over.

I have recently realised that my reaction to the early “DCU” films was tied to my inability to progress through a game when I perceived it was becoming something of an imperfect experience. Something in my brain says: “This is tarnished now. It is no longer a suitable pursuit of recreational time. Return to the beginning and get it right!” I should emphasise that this has been my response to the degree to which I have enjoyed the films of the DCU. I don’t presume to tell others whether or not their experience should be the same as mine.
As discourse on these films has progressed, however, it is clear that there are a fair few people who have watched them and felt that something was lacking. My response has been to wish for a great bug cinematic reset button. Others have responded by arguing at length for the “hidden value” in these movies – that the themes they explore are more profound than we have realised. Some have held to the notion that the films as recieved are the second-rate result of studio interference, and that a pure “Director’s Cut” exists that is what we should have seen.

Whatever your response, the films are what they are, and no “Re” exists to alter the way we have felt about them.

Is it possible that, on occasion, we feel too personally the disappointments of our beloved properties? When I first started reading and collecting comics, there were very few people I shared the hobby with. Indeed, part of what appealed to me about the art-form is that they are a perfect escape for an occasionally lonely and constantly insecure 12-year-old. For the time that I was immersed in those pages, I could forget about feeling small, or humiliated, or excluded. Of course, over time, as a shared hobby it allowed me to find quick connection with others who felt the same troubles that I did, and suddenly I didn’t feel so alone anymore.
My experience of church started to become the same around this time. Like some kind of secret club – once established that I was speaking with someone who shared my faith (or my passion for comics), I was immediately speaking with a friend. Everything was easier, and conversation flowed. I was part of something greater than myself.
I am all too aware of how fragile and fleeting that sense can be, and have seen too many friends step out of these connections because they ultimately felt once again ignored, or, at worst, betrayed. I am grateful beyond words that this never happened in my faith-life – that while my pop-culture connections began to devolve into judgement cast on me because I was not “into” the right stuff, amongst my Christian friends I found nothing but unconditional acceptance.

It does break my heart that this is not everyone’s experience.

I can also understand the desperation one might feel at the sense that this thing they love – this character, this world, this story – that is something they have belonged to is fading. It is no longer what it was…and if that’s the case, what might that mean for someone for whom these stories mean so much? Could it feel like being told that these stories don’t really matter, and neither do you? I wouldn’t wish that on anyone.

The thing is…I think there’s hope. I know it’s a horrible cliché but:

As much as I have been disappointed, then bewildered, then…resigned…as I have watched DCU unfold, there has been a very interesting development.
Wonder Woman was largely appreciated by audiences around the world. As I covered in my review of Aquaman, while it’s hard to pin down exactly whether we call the movie good or not, it was an undeniably fun ride that more than justified the budget. Oddly, while WB have been losing what may be perceived as core to the whole enterprise – namely stars Ben Affleck and Henry Cavil as the two most recognisable superheroes in existence – the decision has not been to abandon the DCEU, but to double down on the things that are working for it. Everyone liked Margot Robbie as Harley Quinn? Great, have a whole movie (yeah, I know it’s an ensemble, but come one). Feeling that the genre in general has been a little dour and serious? Shazam! was one of the most legitimately fun movies I’ve seen in ages. Really, it made me feel like a kid again. That is movie magic.

There’s something magnificent about this direction. Taking sometimes disparate pieces from something that’s not totally working, and reworking them into something new. Something better? That remains to be seen. But for now, people seem to be enjoying these superhero movies where the guiding principle seems to be: “Let’s have ourselves a good time.”

Odd choices, false starts and missteps – none of these mean we need to abandon anything. When I think of the challenges I’ve had getting momentum going with this site…well, I don’t feel so bad about it.

2 thoughts on “Remake; Reboot; Re: Perfection”