‘An entry-level employee at a powerful corporation finds himself occupying a corner office, but at a dangerous price: he must spy on his boss’s old mentor to secure for him a multi-billion dollar advantage.‘

Paranoia has to be one of the most poorly titled films to come out in recent memory. The trailer promises all sort of intrigue and betrayal – and with a cast including Harrison Ford, Gary Oldman, and Richard Dreyfuss – it looked like we were getting an interesting thriller to tide us over until the Christmas release season. What we get instead is a dull, predictable, paint-by-numbers movie that fails to deliver on any of the promises made by the film’s marketing department.

Paranoia feels like the writers sat down one day and said, ‘Let’s write an espionage movie!’ They then proceeded to write all the cool setups and visual cues, but neglected to include any of the actual espionage. The movie plays out almost exactly as the tagline reads, we see Adam Cassidy (Liam Hemsworth) get hired by Wyatt (Gary Oldman) as a spy, and then after a few 30 second scenes telling us all the tricks he’ll have to pull to infiltrate the competition, he’s working there.

The movie repeatedly squanders its chances to show anything approaching intrigue, deciding instead to tell us what Adam has to do and then skipping to the point where he’s already done it. This saps the movie of any real tension, and renders the great title irrelevant. 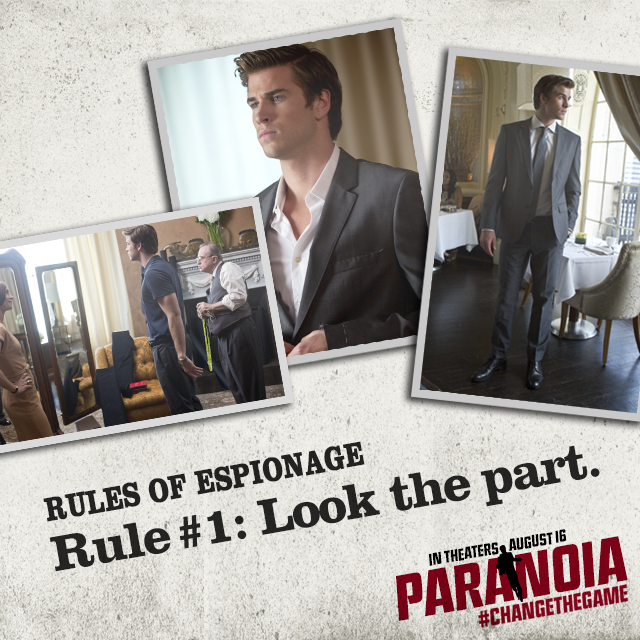 The movie follows this advice, but ends up as hollow as Liam Hemsworth’s character.

The only person to benefit from the large chunks of missing story is the character of Adam Cassidy. Except for an evocative introduction where he tells us the story of his generation – Gen Y’s who feel that their future has been stolen from them by the greed of the previous generations – and his determination to succeed, Adam never feels like a character that could actually accomplish any of the tasks that are given to him. He shares zero chemistry with any of the other characters and doesn’t really do anything throughout the movie except react to the situations he’s forced into. 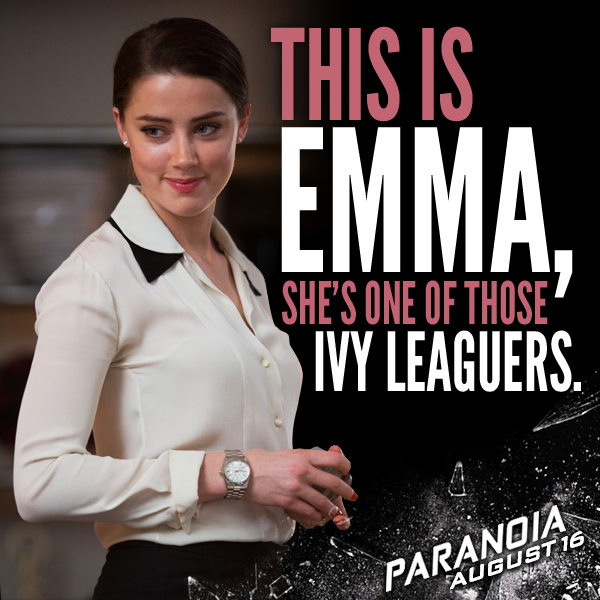 This is Emma, she’s only really in this movie to satisfy the need for a love interest.

Not that any of the other characters fare any better. Amber Heard does her best with Emma, but the character is given so little to do other than appear in softly lit love scenes, that she feels almost like an afterthought.  Gary Oldman is in scenery chewing mode, sporting an awful accent and a pale imitation of Gordon Gekko’s greed is good mantra while Harrison Ford is in his best low-key growl performance to stay under the radar. Richard Dreyfuss is on hand to deal some working man’s advice, (again in a pale imitation of Wall Street) and there are a couple of Adam’s friends around to perform as faithful sidekicks.

None of the characters in Paranoia really feel like they have any say in what’s happening in the story. It feels like they’re merely checking off boxes to conform to the standard Hollywood espionage thriller plot. A snappy visual style from director Robert Luketic does its best to imbue the film with a sense of pace and excitement, but it’s nowhere near enough to save the film from the boring story and characters.

What a waste of a good cast.

Overall, Paranoia isn’t a terrible film. It isn’t even a particularly bad one. It’s just so mediocre in every respect that it will be instantly forgotten the moment that it leaves the cinema. There are dozens of forgettable films made every year; it’s just such a pity that a movie that had so much going for it falls into the category. Don’t bother seeing this one, there are many better movies to spend your time with.

For more information on our rating system, click here.